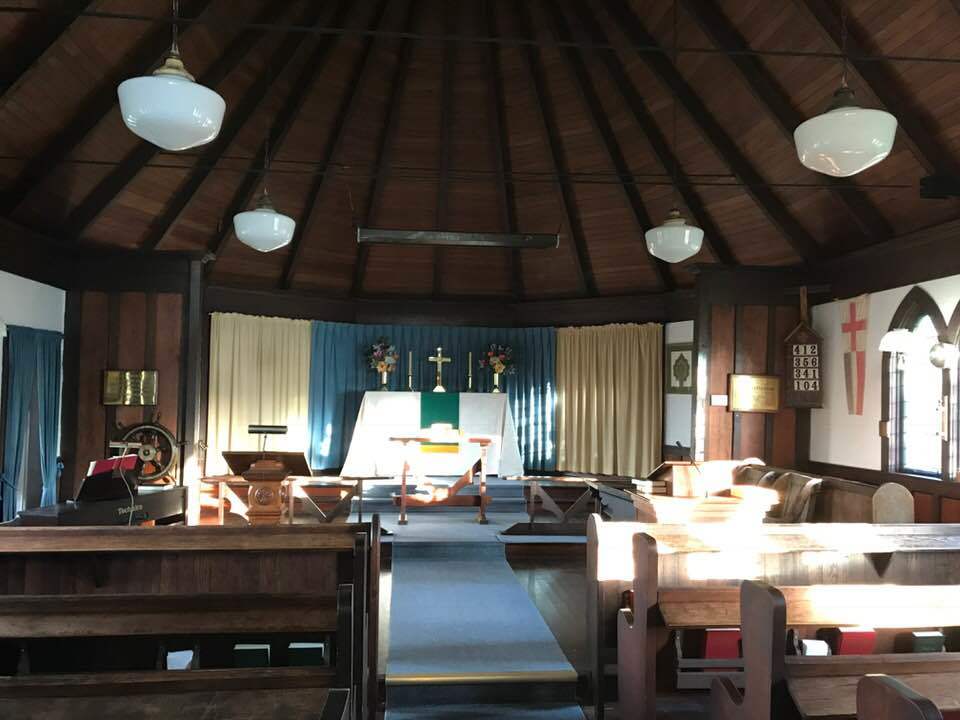 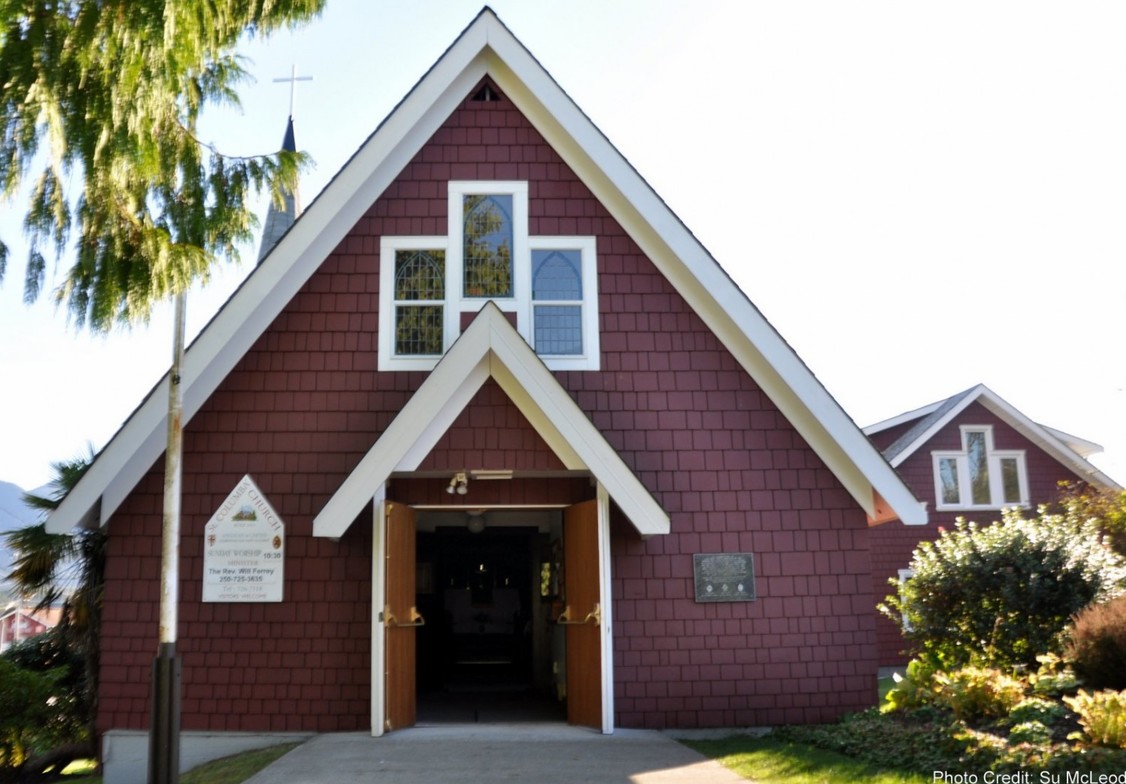 The parish of St. Columba has its roots in a general meeting of the Tofino community circa 1910.  The meeting was organized by the Reverend Seale, of Alberni, who suggested that an Anglican parish be organized in the area.  Services were initially held in the community hall.  In 1912, the first resident clergyman arrived, the Rev. Leslie Alder Todd.  According to reports of the time, average attendance was 32, with over 40 being present on Easter Sunday.

It was during this time that Tofino itself was beginning to grow, and as the town developed, so did a desire for a church building.  Fundraising began, and two lots were purchased.  Much of the funds for the new building came from a bequest from the family of Francis  Beresford Wright, who asked that a church be built in a beautiful rural setting.

The church was designed and built by the Rev. George Aitkens who would go on to design and help build five churches.  Construction on St. Columba began on July 2, 1913, and many of Tofino’s original pioneers helped with the building of the church.  A copy of the Rev. Aitken’s plans for the church is on display in St. Columba.  They were found in the summer of 2013 in a house on Clayoquot Island.

The first worship service was held in St. Columba on October 2, 1913, and on December 30, 1913, the first wedding took place.  Sofus Arnet married Nancy Shaker, and a copy of their marriage licence is on display at St. Columba.  The church was dedicated on February 5, 1914.

At this time the area that the resident clergyman served was enormous.  They travelled by boat to reach many of the far-flung points of their parish, including Vargas Island, Bamfield, Uchucklist and Sechart.  These boat trips could be very dangerous, as witnessed by the Rev. Todd’s experience driving a mission boat onto the rocks in Clayoquot Sound.

In 1921 the ladies group of the church (the ACW) fundraised and built a vicarage near the church.  The building was small and only had two rooms.

The church has been well served by a variety of minister over the years.  Some of the resident ministers were fresh from theological college, and some were more experienced missionaries from England.  One of the best-remembered ministers was the Reverend John Wright Leighton, best known around Tofino as Padre Leighton.  Padre Leighton arrived at St. Columba after serving in several other parishes, and service as a chaplain in World War One.  He arrived in Tofino from St. Alban’s in Victoria in 1930.  He served at St. Columba from 1930-35, and travelled from Bamfield to Zeballos, visiting many of the small communities that dotted the coast, as well as logging camps and mining camps.

In 1952, under the direction of the Reverend Art Holmes, a church was constructed in Ucluelet, dedicated as St. Aidan’s –On-The-Hill.

Padre Leighton returned to Tofino in 1955 and found a church that was beginning to show its age.  He quickly began a fundraising campaign to repair the foundation of the church and the vicarage.  Padre Leighton retired in 1962.

Through the 1960s the church building continued to need repair.  An oil heater that had been installed to replace the wood and coal heater caught fire, and marks from the fire are still visible in the church.  The foundation was replaced, and the roof and bell tower were repaired.  In 1966 the Tofino vicarage was closed, and a house in Ucluelet became the residence for ministers who served both communities.

In 1968 Tofino United Church and St. Columba Anglican Church decided to join together as a shared ministry.  This was at a time of much talk of church union on a national scale.  In the beginning, the church was still considered an Anglican church, with the United Church members simply joining.  However, in 1977 it was decided to form a true shared ministry, and to call ministers from either tradition.  The first United Church minister to serve at St. Columba was the Rev. Merv Bowden.  Along with the new shared ministry, the Rev. Bowden also had responsibility for Ucluelet and Ahousaht.  In 1979 Ahousaht ended its connection with Tofino and Ucluelet.

When the Rev. Bowden left in 1982, it was the desire of the congregation to remain as a shared ministry.  At the request of the Anglican bishop, Logan and Marcia McMenamie and their family arrived for a one-year placement.  McMenamie had no formal training but would go on from the west coast to the Vancouver School of Theology, after which he was ordained and served several parishes on Vancouver Island.  Logan McMenamie is the current Bishop of British Columbia.

The physical building of St. Columba expanded in 1985, as the addition to the entrance of the church was built.  Don McGinnis Contracting, with builders Jim Sadler, Ken Sadler and Sandy Bradshaw were responsible for the addition.  Sandy Bradshaw also made three stained glass windows for the new entryway.

In the 1990s the grounds of St. Columba were significantly improved with the Great Wall Project, which saw 12 tons of local rock moved and built into a retaining wall at the bottom of the property.

In 2012 St. Aidan-On-The-Hill in Ucluelet ended operations as a church and was closed.  St. Columba became the hub church for the whole west coast.  With the closure of St. Aidan’s came a financial shortfall and serious concerns about the future of the congregation.  To offset these concerns, a new rectory was built in Tofino, grants were secured, and the church was able to hire a full-time minister.  In 2017 St Columba once again became wholely a Parish of the Anglican Diocese of British Columbia.

The story of St. Columba is a long one and continues today.  The church and the congregation still stand as a testimony to God’s work on this west coast, and the good news of the Gospel of Jesus Christ.

This short (and incomplete!) history of St. Columba is taken from “St. Columba 1913-2013: A Century of Service”, a booklet written by Adrienne Mason for the 100th anniversary of the church.

Subscribe to receive email updates with the latest news.